Dr. Quigley was born in St. Louis and is a graduate of Harvard College and Johns Hopkins Medical School (Alpha Omega Alpha). After ophthalmic residency at the Wilmer Institute, he did a fellowship with Douglas Anderson at the Bascom Palmer Eye Institute, Miami.

He became the A. Edward Maumenee Professor of Ophthalmology in 1994, directing both the Glaucoma Center of Excellence and, until 2011, the Dana Center for Preventive Ophthalmology at Wilmer.

He was a founding member of the American Glaucoma Society, serving for 8 years as its Secretary. He was elected to 5 year terms as chief executive officer of the Association for Research in Vision and Ophthalmology (ARVO) and Editor-in-Chief of Investigative Ophthalmology and Visual Science.
‍
He has published over 400 peer-reviewed articles, and his reports are the most cited in the ophthalmic literature over the last 30 years (Archives of Ophthalmology, 2007; H factor 118, 59,000 citations).

He is an ARVO Gold Fellow and received ARVO’s Joanne Angle Service Award from ARVO and the Life Achievement Honor Award of the American Academy of Ophthalmology. He has given 43 named lectures, including the 66th Edward Jackson Lecture (AAO).
‍
Dr. Quigley has trained 65 glaucoma clinician--scientists who lead glaucoma centers in the U.S. and worldwide. His research has improved the early diagnosis of glaucoma and has developed instruments and techniques to identify glaucoma damage better.

His investigations found that early glaucoma damage preceded existing detection methods. He was the first to report on long-term success with laser iridotomy. His suturing technique for trabeculectomy has been widely adopted.
‍
He has participated in pioneering studies of the epidemiology, morbidity and progression rate of glaucoma and other eye disease in American, African, Asian, and Hispanic populations, serving as a consultant to the World Health Organization.

He conceptualized new roles for iris and choroidal volume change as risk factors in angle closure glaucoma.  In the laboratory, he has demonstrated successful gene therapy to protect retinal ganglion cells from experimental glaucoma, and developed glaucoma models in monkeys, rats and mice.
‍
Dr. Quigley is an advocate of natural gardening techniques in ecorestoration projects in Baltimore, developing Poplar Hill Park (see www.waytogarden.net). He is a Horticultural Assistant at the National Aquarium, Baltimore. His son, David, is on the University of California San Francisco faculty in Oncology and Epidemiology as a bioinformatics specialist in cancer research. His daughter, Erica, is a landscape architect, designing outdoor play spaces. He loves being asked about his 2 grand-daughters. 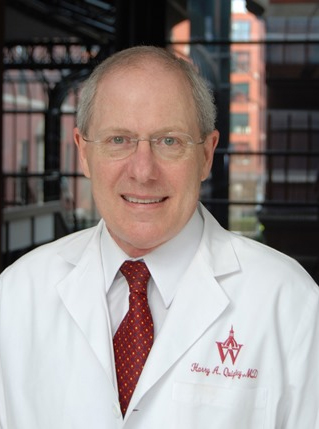